An Audience for Trio Tregenerazionale with Pope Francis 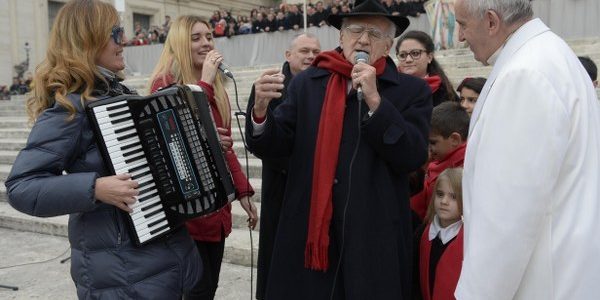 Pope Francis received in audience Teddy Reno, Rita Pavone and their two sons, Alex and Giorgio, on the 16th of december 2015, just the day before Holy Father’s Birthday, the Trio Tregenerazionale, formed by Teddy reno (89 years), Sylvia Pagni (48 years) and Elisa Riccitelli (20years), with a children’s choir were invited to sing “Uno come noi”, a song written to celebrate Pope Frances, with musics by Sylvia Pagni, and words by Teddy Reno. testo di Teddy Reno dal titolo “UNO COME NOI”.
The new Trio Tregenerazionale, is unique in the world for the fact that he joind three generation and they had the honor to perform live the song “UNO COME NOI” , a song written to demonstrate that the Pope appears just like one of us, a true friend, a humble person.
Music of the song is build up by swing and tango, expecially this one is a kind of music beloved by the Holy Father.
Pope Francis himself suggested to teddy Reno : “The nest time we’ll meet, I want you sto sing me a true Argentine Tango”, and that’s how “Uno Come Noi” took life. Pope Francis appreciated the choise of the children’s choir from the Church in Scerne di Pineto in Abruzzo, directed by father Janusz Szmigielski.
The success was great. Pope Francis appreciated Sylvia Pagni’s accordion, Elisa Riccitelli’s voice and Teddy Reno Himself.

Google Analytics is a web analytics service provided by Google Ireland Limited (“Google”). Google uses the Personal Data collected to track and examine the use of this Application, compile reports on its activities and share them with other services developed by Google.
Google may use your Personal Data to contextualize and personalize ads in its advertising network.
This Google Analytics integration anonymizes your IP address. The anonymization works by shortening the IP address of the Users within the borders of the member states of the European Union or other countries that are members of the Agreement on the European Economic Area. Only in exceptional cases, the IP address will be sent to Google's servers and shortened within the United States.

Gravatar is an image visualisation service provided by Automattic Inc. that allows this Website to incorporate content of this kind on its pages.

Google Maps is a maps visualization service provided by Google Ireland Limited. This service is used to incorporate content of this kind on its pages.

Google reCAPTCHA is a SPAM protection service provided by Google Ireland Limited.
The use of reCAPTCHA is subject to the Google privacy policy and terms of use.

Google Fonts is a service used to display font styles operated by Google Ireland Limited and serves to integrate such content into its pages.